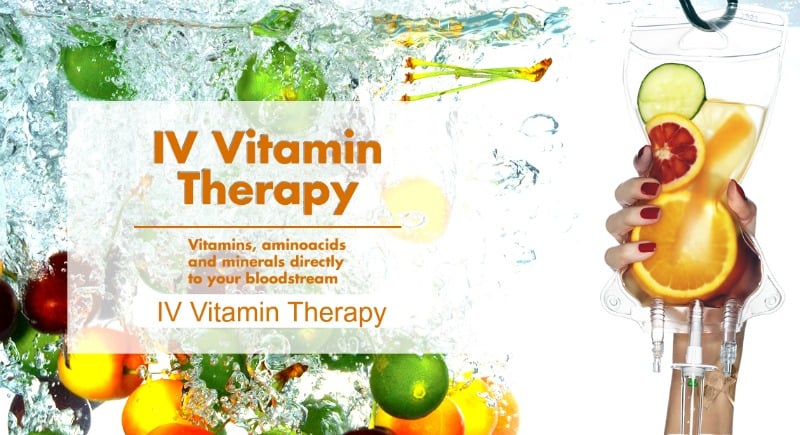 This IV provides a high concentration of Vitamin C that is designed to boost the immune system and reduce inflammation through Vitamin C’s antioxidant function. Vitamin C, also known as ascorbic acid, is a water-soluble vitamin. Unlike most mammals and other animals, humans do not have the ability to make their own vitamin C. Therefore, we must obtain vitamin C through our diet, but most do not get near the amount of this beneficial vitamin. Vitamin C is required for the synthesis of collagen, an important structural component of blood vessels, tendons, ligaments, and bone. Vitamin C also plays an important role in the synthesis of neurotransmitters, which are critical for brain function.

Glutathione is the body’s most powerful natural antioxidant and is found in every cell. Glutathione is a tri-peptide (composed of three amino acids, Glutamic Acid, Cysteine, and Glycine) that bolsters the immune system and also helps neutralize damaging free radicals. Antioxidants can even help your body repair free radical damage caused by such things as stress, radiation, infections, drugs, medications, malnutrition, and aging. Animal and laboratory studies have demonstrated that glutathione has the potential to fight almost any disease, particularly those associated with aging, since free radical damage is the cause of many of the diseases of old age. When a deficiency in Glutathione develops, oral supplements do not offer an answer because the absorption in the gut is extremely poor. Injection or Intravenous administration is really the gold standard to really maximize the antioxidant effects of Glutathione.

Immune has all the components as the Cadira Original Injection along with the additions of Dimethylglycine, Selenium, Lysine, Zinc and Taurine. Lysine is added because of its contributions to bone, muscle and joint stability and strengthening while also instrumental in supporting the immune system. Dimethylglycine, Selenium and Taurine are added because of their antioxidant properties and cellular repair functions.

Thermal utilizes a specific blend of co-enzymes, B vitamins and amino acids to generate energy at the cellular level and increase blood flow to the brain and muscles while restoring the body’s core energy in the form of the monosaccharide D-Ribose. This formula contains NADH and Acetyl-L-Carnitine, which may boost physical and mental alertness by increasing energy production in the mitochondria, the power plant for the human cell. The addition of Arginine delivers increased Nitric Oxide supplies to the vascular system, allowing for increased blood flow to both the brain and body. Thermal is intended to support energy production and transport in the body, with a goal of raising overall exercise capacity.

Human chorionic gonadotropin (hCG) is a hormone that supports the normal development of an egg in a woman’s ovary and stimulates the release of the egg during ovulation HCG mimics the effects of luteinizing hormone, therefore the administration of HCG is used in certain circumstances to enhance the production of progesterone. In men, HCG injections are used to stimulate the leydig cells in the testicles to synthesize testosterone. Typical uses for HCG in men include hypogonadism and fertility treatment in women.